You can learn so much about yourself and photography by briefly getting familiar with art history. But is photography art in the first place?

Since I became a landscape photographer, my enjoyment of visiting art museums has increased by a lot. Danish art history is rich and is reflected in the art history of the world and past trends. One of my favorite museums is the Skagen Museum, and you will find it in northern Denmark in the small town of Skagen. In Skagen, a group of painters formed a colony in the late 19th century. Their paintings are arguably the most famous in Danish art history and also some of my favorite paintings.

Do not worry, I will get to the photography part in a bit.

A three-exposure photo. Focus stacked and the birds are blended in from a third exposure at high ISO.

This colony of painters painted their families, the daily life in Skagen, the surrounding landscapes, and the fishermen who lived in the town. The painters were mainly inspired by impressionism, which is known for an emphasis on accurate depiction of light, ordinary subject matter, movement, and some different painting techniques. The main point was not to depict a subject matter as seen by the eyes, but as perceived by the painter; it was the impression of the painter, which is depicted.

In one of the most famous Danish paintings (see below), the painter PS. Krøyer painted a get-together of some of the painters from the colony. He was inspired by the real events captured in the photo, but the painting is not an exact depiction of what happened on that day. No, Krøyer was much more interested in giving an impression of the friendship and social bonds of the colony, which led to his painting “Hip, Hip, Hurra.” 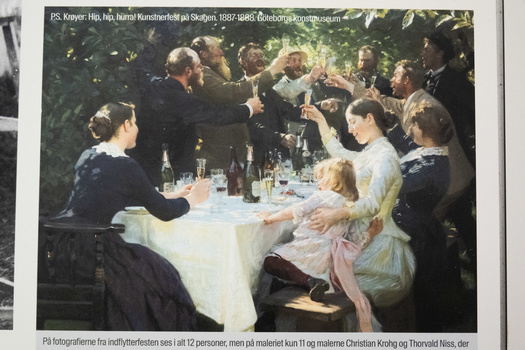 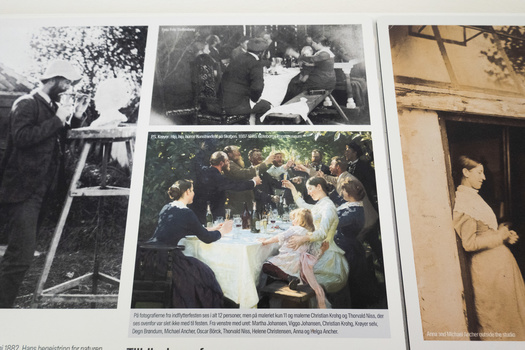 Even though there are many photos from the late 19th century, we humans have a tendency to look to paintings to understand the past. However, paintings from the past — no matter how realistic they look — are still a product of the painters’ skills, impression, vision, and purpose.

This is the same for all the artistic fields, no matter if it is painting, sculpting, or modern arts like photography or even computer graphics. Photography does not have to be a single thing with a single purpose. Yes, it is fantastic for documenting events and even better if the photograph is accompanied by text. However, journalistic photography is not the only purpose of using a camera, just as a “truthful” depiction of an event in the 16th century was not the only purpose of painting (it very rarely was).

No humans experience water as long streaks. Some photographers may disapprove of the long exposure effect, but you cannot deny that it has certain aesthetic value to it. It is your artistic decision to use it or not.

Contemporary landscape photography is arguably much more about the impression of the individual photographer than depicting the landscape as realistic as possible. You may not like this. It is often important to remind my co-photographer that nobody in the entire universe has the authority to decide how an individual should use their camera. Not even National Geographic who is often celebrated as a kind of “standard of nature photography.” National Geographic decides what they want to publish in their magazines based on their criteria, which you can choose to follow. National Geographic is known for more “realistic” depictions of places and events, but they are not to decide whether you want to or should photograph like that.

I will bet that in 80 years (or even earlier) some art historians can say a whole lot of things about the tendencies within landscape photography in the early 21st century. How people made fantasy-esque landscape photos because they are influenced from growing up with cartoons and fantasy movies, how many photos are taken during travels because people were not limited to their own backyard, how many photos look alike because social media helped push the most popular landscape photos and the internet made it easier than ever to learn the skills of the most popular landscape photographers? There are likely even more tendencies to point out. As I am writing this, the world moves on, as it always has, and in a few decades, we can look back and analyze why things were as they were and we can keep discussing what good photography is and what good art is, as we always should.

My photo from Eystrahorn in Iceland is made up of several exposures (a so-called time blend). I experienced all of it and put it all together in one image. The post-processing helps balance tones, colors, and light, and make it “pop.”

There is a tendency to label this kind of impressionist landscape photography as “fake” because it reminds some people of fantasy that they cannot see it in reality. Here is a surprise for you: art requires imagination! Just because the photo depicts more (or less) than the eye can see does not make it fake. It is as narrow-minded as labels come. The point here is that there are several different approaches to photography, and they are all valid. Some are more artistic than others, and that is all fine. When impressionist paintings first started to hit the world stage, they were ridiculed and met with harsh opposition too from the conventional art community.

iPhone 12 vs. iPhone 11: Everything Apple changed and who should upgrade