A woman reacts as she waits for a train trying to leave Kyiv, Ukraine

Smoke and flame rise near a military building after an apparent Russian strike in Kyiv, Ukraine. Big explosions were heard before dawn in Kyiv, Kharkiv and Odesa 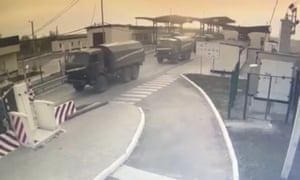 In this image made from video provided by the Border Service of Ukraine, military vehicles pass a control point at the Armyansk checkpoint at the Ukraine-Crimea border

People wait at a bus station to go to western parts of the country in Kyiv, Ukraine

Ukrainian firefighters try to extinguish a fire after an airstrike hit an apartment complex in Chuhuiv, Kharkiv Oblast, Ukraine

Fire is seen coming out of a military installation near the airport in Mariupol, eastern Ukraine

People take shelter in a subway station in Kyiv

Jobfished: the con that tricked dozens into working for a fake design agency

In a show of tenacity, Zenith Bank surpasses market expectations with double-digit growth in gross earnings